sh*tgibbon: a timely study in etymology and usage 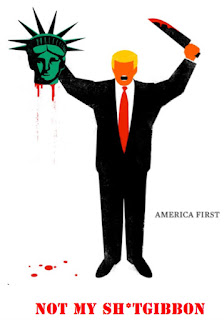 It's a great time for the English language.

Sometimes we just don't have the right tool for the job for expressing ourselves.  I'm a big fan of building vocabulary, but there are moments when no existing word accurately conveys our idea.  Maybe it's because we're trying to describe something new in the world.  Maybe we need cathartic release and a laugh at the same time.  Maybe the available choices just don't grab or persuade our audience.

That's when we innovate.* (*make stuff up.)  Scholars estimate that Shakespeare used less than 18,000 words -- and that he originated approximately one out of every ten.  We add words to our language all the time.  Today the Oxford English Dictionary contains more than 600,000 words.  Some of those words become necessary to describe something that didn't previously exist (think Internet, which derived from inter-networking, according to TCP/IP architect Bob Kahn at 59:35 in this video).  Some of those words have a ring to them or capture our feeling in a familiar way.  Why else would Homer Simpson's "Doh!" make it into the Oxford English Dictionary?  But in spite of what some of your teachers tell you, you can't just "use your own words" -- no one else would understand what you're talking about.  The words we create and use are currency.  Their value depends on the shared sense of meaning our readers and listeners attach to them.

As you may remember from your days on the elementary school playground and last semester's analysis of the ad hominem fallacy, calling people names is neither personally appealing nor especially effective in persuasion and argumentation.  Tactics like this are often a last resort for people who have run out of ideas or evidence and are desperate to say something.

These days, it appears as though desperate times are calling for increasingly desperate rhetorical measures.

Which brings us to "The Surprising Rise of the S---gibbon."

Shortly after he was elected, President Donald Trump offered to destroy the career of a Texas legislator who opposed civil asset forfeiture.  (Civil asset forfeiture is when law enforcement officials can take your money and your property without even charging you with a crime, much less getting a guilty verdict in a court of law.)

Now, normally, citizens of the republic -- including me -- would expect more decorum from an elected official, even if that official was standing up to a bully.  As a father and a professional educator, I also feel a responsibility to be a role model.  But these days you have to crane your neck and look in America's rear view mirror to catch a glimpse of normal, lying there in the middle of the road next to truth and integrity, bleeding out on the asphalt.  There is nothing normal about having a president talk about destroying a legislator's career, or banning Muslims from entering the country, or grabbing women.  There is nothing normal about that president appointing a Secretary of Education who knows NOTHING about public education and thinks we should have guns in school to protect us from grizzly bears. Uh huh.  Grizzly bears.

For those of us who study how we communicate and use language, sh*tgibbon is something of a silver lining. It turns out that this word has a history, which you can read more about here.   The study of the origin and development of linguistic forms and words is called etymology.  A word's etymology provides insight into how culture shapes language and vice versa over time.  Check out the Online Etymology Dictionary and look up your favorites.

Sh*tgibbon also gives us a creative outlet and a path forward.  If you're not able to vote, or participate in a public demonstration, or call your elected officials, or tie up a Trump property phone line, or take any other immediate civic action, you can still find ways to express yourself in words using what you learn from sh*tgibbon.  Taylor Jones, a Ph.D. candidate in Linguistics at the University of Pennsylvania, builds on Ben Zimmer's concluding note that, "Metrically speaking, these words are compounds consisting of one element with a single stressed syllable and a second disyllabic element with a trochaic pattern, i.e., stressed-unstressed. As a metrical foot in poetry, the whole stressed-stressed-unstressed pattern is known as antibacchius."  Jones goes on to provide a recipe for making a sh*tgibbon in two easy steps.

Participation is essential to living in a democratic republic..  Do it.  Post a sh*tgibbon poem, story, song, nonfiction essay or [?] to your course blog and explain your creative process.  And then do more.  Your reading audience and your republic await.

[credit: many thanks to Edel Rodriguez for the inspired Der Spiegel cover art.]

This work is licensed under a Creative Commons Attribution-NonCommercial 4.0 International License.